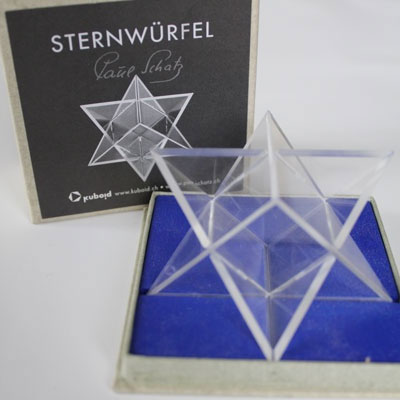 With the Star Cube, one comprehends the cubic crystal system from the connection of cross and star.

For shipping to Germany: You can also order through our German partner »Ursprung-Handelsverbund« and benefit from lower shipping costs

The cube is essentially regarded as an individual form without reference to its geometrical and cosmic environment. Paul Schatz wanted precisely this environment to become visible once more to people who appreciate the beauty of forms. In line with the tradition of the Renaissance, with the works of Jamnitzer, Dürer and Kepler, Paul Schatz described the Star Cube as follows: The Star Cube results from the alternate penetration of two cube corners (two trilateral pyramids). The Star Cube illustrates the expansion into infinity of the cube faces. The cube opens itself up to space in the form of two trihedrals that penetrate each other. The open wedges projecting from the solid augment the cube, turning it into a star. Made level, the components of the Star Cube form three crosses. With the Star Cube, one comprehends the cubic crystal system from the connection of cross and star.

There are no reviews yet.

Be the first to review “Star Cube with case” Cancel reply